I get called the fun police daily in my house for making decisions for the children, sometimes it seems harsh but they will thank me in the future. (I HOPE) 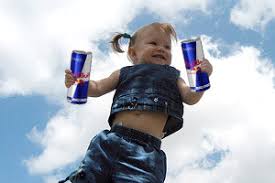 – with a fifth of 3-10 year-olds having them regularly.

Have you heard of Red Bull the energy drink? Well, read on…

Red Bull released in the UK in 1994 and quickly became popular. Staying up to work and/or party became easier when you had an energy drink inside you.

Who doesn’t want to have the energy to dance and have fun all night long?

At what cost though?

The drink soon became like catnip to children and adults alike.

What makes it so dangerous is the sugar content and the caffeine content. With 26 grams of sugar per can and 77.4mg of caffeine per can, you can understand why it’s destroying our mental and physical health.

What does it do?

Causes an Inability to focus/ Jitters/ Stammers /Lack of sleep/ the acidity of energy drinks, in general, is bad for bones, muscle, and brains.

Addiction occurs due to the “reward” feeling you get when you drink it, then there is the need for more each time building up an intolerance that you may not have even noticed.

The sugar content is bad for your teeth, causing tooth decay and erosion.

You can not sleep or rest. Kind of the point I guess of the drink but not healthy at all, when you want to rest you can’t.

When you are awake longer than your body should be and lacking sleep then you run the risk of other health problems, these include depression, obstructive sleep apnea, hormone imbalances, and other chronic illnesses.

They advertise these drinks as …

Re-vitalising/ Gives you wings/ gives energy to the body and mind.

The 500ml can of caffeine intake is way more than the daily intake considered safe for children under 14.

Most supermarkets have banned the energy drinks to under 16’s.

Even with all the bad press, it is still number one in sales?

“They are completely inappropriate for children to consume, form no part of a healthy balanced diet, and should be banned for under 16s.”

That is a snippet from a newspaper headline, on the subject of energy drinks in general and the high sugar content.

“Red Bull gives you wings”, in my opinion, the wings should be clipped. Fun Police right there! I earnt that name damn it.

Harsh, I know but I am a mother, and I am trying to steer my children to optimum health and to living optimum lives.

Energy drinks are a cop-out in my opinion to gaining real energy from nutritious food and getting the balance of macro and micronutrients.

When advertising claims the drink gives you wings it is hard to compete. Education is key so I will keep educating and steering my children and clients in the right direction while maintaining my title as

I always try, as my children will tell you to “change everything into a healthier version ” something that would otherwise be unhealthy, I admit it ok, I make adjustments.

I do try to maintain a balance in the house and give the children a chance to make their own choices. I do get tempted to make decisions all the time for them, but I have held back a bit during the christmas holidays,  I know that croissants and honey are not going to give you energy or happiness after about 30 minutes of finishing them, but I played this one out well and here were the results.

1/ Pure enjoyment at first, maybe they thought I had changed overnight and would now be a “FUN MUM”

2/ Sugar high with loads of extra energy then a crash

3/ Bad Mood /emotional/ tired/ unhappy and crying at the fact there was no milk opened so they had to open a new one. SHOCK HORROR!

4/ Hunger again within an hour usually

5/Craving for sugar again to get back the feeling of pure enjoyment. The feeling that had fired up the brains reward system.

I taught the kids a lesson there and they saw what happened, now they asked for a compromise on Saturdays, I allow them a croissant and honey but they have to add turkey/chicken or ham with it. A protein with that kind of breakfast will break the crash and keep the hunger at bay a little longer. Plus I do not get stressed with the emotional outbursts.

We all win if we compromise.

Maria is a qualified Nutritionist based in Hertford. Her passion and involvement in nutrition started a number of years ago in response to a kidney condition, which rendered her reliant upon GP-prescribed antibiotics. By taking proactive control of her nutritional program, she achieved complete recovery. She coupled this with quality health supplements regained control of her life.

About me….. I have always loved exercise and have enjoyed pushing myself hard. I’ve done the London to Brighton bike ride, several triathlons for charity, numerous half marathons and in 2007, the Flora London Marathon, but as a younger woman my endless exercise not only left me feeling wiped out but did not seem to improve my figure to any great degree and I never understood why – now, having studied the body and nutrition endlessly – I do!

I seem to be most popular with clients that are in their 40’s, 50’s 60’s or 70’s or those under the age of 18 and I really enjoy training these age groups, probably because I’m a mother and am about to turn 50 so can truly relate to these clients and understand the way they should be trained to achieve the best results. Indeed, my youngest client is 13 and my oldest is 71 and if you read his testimonial on my ‘testimonials’ page, you will see how training with me has improved his wellbeing and helped a back problem that he has had for years.

I love what I do, nothing could be better than helping people to get fit, to understand nutrition better and to change their bodies for good!

Previously, she worked for The Varney Practice for 10 years. She qualified from Middlesex University in 2002 and has been part of the clinic since then.

Being a keen sportswoman, including participating in national league hockey and triathlon, Katie has a strong interest in musculoskeletal and sports injuries, rehabilitation and prevention. She also has an interest in complex spinal pain.

Since qualifying, she has undertaken a wide variety of post-graduate training including acupuncture, biomechanical assessment, intramuscular stimulation, ultrasound imaging, taping and spinal manipulation. Katie has been qualified for 10 years is a specialist in IMS, joint mobilisation and whiplash injuries.

As a highly experienced Fitness Coach, I run my own freelance business providing high-level Personal Training, Strength & Conditioning for elite athletes and Sports Therapy throughout Hertfordshire and North London.
I have a wide and varied range of clients, from athletes through to those suffering with physical and mental disability. I have worked with local authorities and the NHS on an number of projects including – Fall prevention for the elderly throughout Hertfordshire and GP referrals throughout the borough of Hackney.

I use ‘Strength and Conditioning’ techniques combined with my own training system, cardiovascular training, hypoxic altitude training and sports therapy/massage. My experience allows me to adapt these techniques to create bespoke programs and achieve excellent results with all my clients.
As well as specific training, I run Rebel Striders which is an outdoor fitness class and a RowAthlon gym competition App which helps achieve increased results with my clients and others.

Sessions may take place at your home, in the gym, on the athletics track, on the velo drome or in the swimming pool.
Brian’s services include